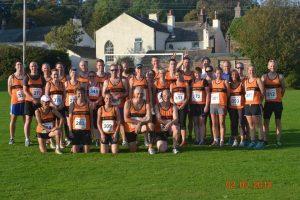 It all started on 4 October 2007, when a group of 5 runners met in the village and went out for a run together. These friends had been running together informally for some time, but agreed that they would benefit from more structured training.

The name ‘St Bees Triers’ was chosen to indicate that ‘we’d give anything a try’! Others joined over the next few years and, helped by a grant from St. Bees Parish Council, we were able to buy some club vests. The orange and black design chosen to look like bees!

From the start, a triathlon was organised each year using the St Bees school pool. This event could be done as a relay, so families often took part, making use of the children’s swimming prowess.

As the club grew in size, more events were organized, one of which was covering the Cumbria legs from Ulverston to St Bees for Barry the baton, who was passed on from runner to runner around the coast of England, Scotland and Wales. The club also completed the St Bega route as a relay as a forerunner for the extremely successful St Bega’s Ultra, organised annually by our Events Secretary, Jon Raymond.

We are an incredibly social bunch and despite the grueling Tuesday and Thursday night training sessions and Sunday morning runs you are more likely to suffer arm repetitive strain injury due to the copious beer drinking opportunities. We also organise many special social events throughout the year which are open to all members and non-members.

St Bees Triers is predominantly a running based club but many of our members also enjoy cycling and open water swimming in the warmer months.